LINCOLN — The game looked like one out of the old Big Eight days, and plenty of players from that era showed up. 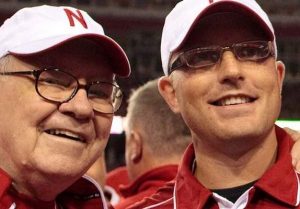 Many previous Oklahoma and Nebraska award winners were introduced during a halftime ceremony, as well as former coaches Barry Switzer and Tom Osborne.

Among those introduced were former Heisman Trophy winners, including Oklahoma quarterback Sam Bradford. The junior won the award last season, but he underwent season-ending surgery recently on his throwing shoulder. He is expected to enter the NFL draft.

Nobody was having more fun, though, than the guy with the thick New Jersey accent who was smiling as if he would still enjoy hitting quarterbacks. Former NU defensive lineman Christian Peter was in attendance, standing on the sideline for much of the first half next to his brother, former All-American Jason Peter.

“It’s still the same,” Taylor said. “No doubt about it. This is still a great rivalry. People try to say Colorado or other games are rivalries. That’s not a rivalry. This is a rivalry.”

Also on hand was current NFL player and former Husker Adam Carriker. The defensive lineman is a starter with the St. Louis Rams, who have a bye week.

LEAP TO THE CROWD

Call it the Lincoln Leap.

Running back Roy Helu was so “over-excited,” as he described it, after the final seconds ticked away that he jumped into the crowd.

Just not as gracefully as it’s seen on television.

Sen. Charles “Chuck” Schumer, D-N.Y., the third-ranking Democrat in the Senate, was the guest of Nebraska Sen. Ben Nelson. The two watched the game from University of Nebraska-Lincoln Chancellor Harvey Perlman’s skybox.

Another New Yorker, World Series champion Joba Chamberlain, was home in Lincoln on Saturday to watch the Huskers. The 24-year-old former Nebraska pitcher, standing on the field, was introduced to the crowd in the first half.

The New York Yankees reliever pitched in three games against Philadelphia during the just-completed Fall Classic. Chamberlain earned the victory in Game 4 as the Yankees scored three runs in the ninth after he allowed an eighth-inning home run to Pedro Feliz.

Chamberlain described the World Series experience as “tremendous.” The Yankees held a ticker-tape parade through Manhattan on Friday to celebrate their 27th championship.

“To be with that organization and my teammates and to be able to celebrate the way we did, it was a great year from beginning to end,” said Chamberlain, in his third year with the Yankees after playing at NU in 2005 and 2006. “We never gave up and backed each other up, no matter what the score was.”

Chamberlain’s father, Harlan, held his post in the west stadium Saturday. The elder Chamberlain works on the NU event staff. He watched every World Series game in person and celebrated with his son on the field after the Game 6 clincher in New York.

“It was awesome,” Joba said. “I had my son there and my dad there to see one of the most special moments of my life. It’s right up there with seeing my son born and being in the College World Series at Nebraska.”

Unless Bill Gates shows up on a sideline sometime soon, Nebraska can boast the richest honorary assistant coach this season.

Warren Buffett, a Nebraska alum, was one of a handful of people picked as honorary assistants Saturday. Buffett took pictures before the game, even pulling out his wallet and posing as if he was giving it away.

A star-studded group of recruits got the rock star treatment before kickoff Saturday. Nine prospects from across the country were cheered, photographed and, yes, flattered by NU fans.

Guy, Cooper, Mitchell and Hill all had their cell phones out taking videos and pictures of the pregame festivities. They were also greeted by NU Athletic Director Tom Osborne, who stopped by and shook hands with each of them.

At one point, Guy was called over to the fence near the stands by a couple of Husker fans for a picture.

Also on hand were a large number of prospects making unofficial visits, including a few NU commits and a target or two. Among the targets was Jamal Turner, a 2011 quarterback prospect out of Arlington, Texas. Turner stood for a while and talked with NU running backs coach Tim Beck in the end zone as Nebraska warmed up.

There was an addition to Nebraska’s pregame entrance Saturday.

A short video that showed many of the current Huskers, as well as highlights from this season, ran before the regular video showing great moments in Husker history.

The new segment featured some of the biggest hits and moments of the season. It rolled right into the Tunnel Walk music before the Huskers came out to the field.

All over the place Saturday were signs of the Cody Green era. Literally.

Fans showed their support for the true freshman in his first home start with posters and signs. One read “We bleed red, black and Green.” Another said “In Green we trust.”

It was the first time Green introduced himself with the starters in pregame introductions on the video big screen, a sight that sparked the crowd.

Also, NU students continue to come up with different ways of shouting out their defensive hero. The latest Saturday: a sign that ready “Suh-perman.”

There was a moment of silence before the national anthem for the victims of the week’s shootings at Fort Hood, Texas. … There was a large military presence on hand, with many service members standing on their chairs behind the NU sideline for much of the game.