This entry was archived from Dossier Journal and was written by Adam Novy, originally posted on June 21, 2009 at 1:29am. 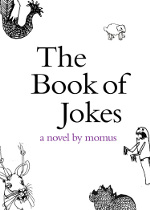 At the unimagined crossroads of Truly Tasteless Jokes and 1,001 Arabian Nights stands The Book of Jokes, by the Scottish songwriter Nick Currie, who goes by the pen-name “Momus.” The main speaker of The Book of Jokes, “Sebastian Skeleton”, finds himself in prison, where he is targeted by a Murderer and a Molester — those are their names — whose dreadful intentions can only be suppressed by Sebastian’s storytelling, which makes him a Scheherazade figure, whose subject is almost exclusively his own family. When Sebastian was a boy, the Skeleton family performed — experienced? embodied? — a very particularly gruesome and hilarious array of dirty jokes, as when, for example, Sebastian’s father falls in love with a duck, and then grows jealous of this duck’s duck boyfriend, whose barn he sets on fire, and then parades his mistress duck before his wife, announcing, “This is the pig I’ve been fucking.” (33) And when his wife protests, he says, “I wasn’t speaking to you.”

As Sebastian escapes prison with the Murderer and the Molester, the stories he tells grow complex, self-referential and oblique, and while each one takes the shape of a joke, chapters do not necessarily end there, they press on in unexpected, melancholy forms. Sebastian’s mother, Joan, leaves his father and dates another woman named Joan, while his father subjects him and his sister to escalating abuses I had better not describe, and entertains a priest who tries to exorcise his demons, and who also tells the one about the butcher and the human-eating cat. The Molester and the Murderer confess that they are innocent of their crimes, and later turn out to be lying. Everyone goes chasing their desires and never quite achieves them, and they never really understand themselves, which Momus echoes formally by having the Murderer and the Molester argue throughout the book over whether a man can really be his uncle’s uncle. The Book of Jokes is not a collection of punchlines or tension-building schemes, it’s a flexible and sensitive solution to the problem of how to invigorate conventions like the novel using overlooked materials.

Momus is a slyly articulate stylist with a lovely flair for syntax and the lexical. An example: Sebastian’s mother’s lawyer wears “…a fibule-fastened chiton surmounted by a himation, itself topped off by a jaunty chlamys…” (124) He also has a sensitive instinct for ethics: of Sebastian’s father, he says, “He was consummate hypocrite. Or, as he preferred to put it, a dialectician.” (150) And he finds a way to blend the funny and the horrid into the banal: “My father, meanwhile, spends his time making highly detailed technical drawings with a mechanical pencil. The drawings depict utopian improvements he intends to make to the estate. We know he will never implement these plans, and soon he admits it to himself, turning to his feathered friend instead.” (49) This passage wouldn’t be out of place in Thomas Bernhard; substitute the internet for the duck and you have almost every father in the world.

The Book of Jokes contains scenes of sexual violence that are genuinely shocking, which is Momus’s goal, of course: to transcend every barrier of taste, good and bad. On the other hand, the book offers chances to debate all sorts of questions we don’t usually get to ask, such as, is it worse to describe your father’s coitus with a duck, or your son’s? The Book of Jokes is an absolute gem.