We see the letter “K” beside numbers when pertaining to money. But what does K mean in money? 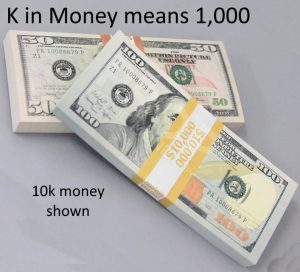 The Origin of the Word “Kilo”

Kilo came from the Greek word “chilloi”. When the French introduced the metric system, they used the word “kilo” to represent a thousand. However, for the Greeks, the French representation of the word chilloi is a little different. In the Bible, this Greek word describes an indefinite time.

Kilo as an SI Prefix

It’s good to remember the Scientific Notation when talking about K in money: Kilo is three zeros, so that means 15K in money means 15 plus three zeros, or 15,000.